What are you doing with your new weight loss? 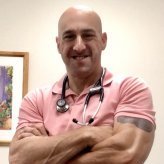