Even though I have always been overweight in my adult years, I have been active. It would down right piss me offwhen people say just exercise. There mouths would fall open when I saw, I have two young kids, work out twice a day (cardio in the a.m. and weights with a trainer or fitness classes at night). In my spare time, I also played co ed softball twice a week. I found out I had thyroid disease just after college as the freshmen fifteen would steadily be added each year thereafter. I would gain and re-lose the weight repeatedly. After I married and had kids I steadily went from 165 to 276 at my highest. I started having sports injuries such as heel spurs and torn muscles along the way which would stop the workouts to say the least. In Dec 2011 my husband's job brought us 800 miles from home. I have been here 7 months and still dont have any friends. I joined several softball leagues hoping to find an outlet. I know I am a decent player so I was shocked when my coach batted me last game after game even though there was girls on the team who never played before. I finally asked him why and was shocked with his answer. He said well, to be honest, I have no place else to bat you given you size. In fact, I see you as a liability on the team. Granted my batting average is about 800. But he didnt see that, he just saw a fatso playing ball. I should have told him offbut instead I waiting until after the game and cried all the way home. It was then I decided to get help. I see it as a blessing that being so new to town, people I met from now on wont know the morbidly obese me. 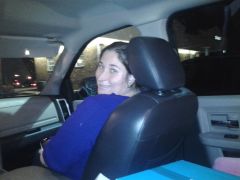