As a kid I had a skinny body, and a large head. People always used to ask me when was I going to grow into my head. Well in 1982 we had a bad snow storm in Atlanta. I can remember that week just like it was yesterday. We were out of school for several days, because the temperatures were below freezing. The one day that the temperature was expected to be above freezing we had to go to school. That morning I woke up with a sore throat. My Grandfather told me that if I was not going to school, then I needed to go to the doctor. I told him okay let's go. So off to the doctor we went that day. Dr. Bateman was his name, and he diagnosed me with tonsillitis, and suggested that I have my tonsils removed that summer. The tonsils were removed that summer, and the weight started coming on.

Thirty years later at 520 pounds I had finally had enough. Up until that point being overweight really had not affected me too much. Sure I could no longer ride roller coasters, or half the rides at white water. But I just accepted it at as fact of life. Little kids that did not know me, would see me in stores, and say "WOW YOUR FAT!" It would bother me, but I just chalked it up to kids being honest. Because I was really fat. The turning point came when I started not fitting in the car. I could no longer walk around the mall, or Wal-Mart without stopping 100 times.

I had the surgery on March 14, 2013, and it is the best decision that I have ever made. Of course I wish that I could have stayed skinny all of my life. But I know that there is a reason why I went through this process. Now I have a goal to help other people. I am going to change my major and college, and get a degree in exercise science, so I can bariatric surgery patients exercise properly after surgery. 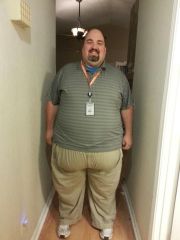