12,400 profile views
We each have a unique journey. I was born with a genetic condition called BPES and it caused hormonal disruptions and premature ovarian failure. I had mild weight issues throughout my adolescence (carried an extra 10 or so pounds) that became an extra 50+ pounds by the time I was 20.
Tried all the diets, sometimes briefly successful. Lost a total of 70 lbs on Weight Watchers (2002-2003) and kept it off for about 5 years then regained slowly over several years, along with mild well-managed type 2 diabetes.
Hysterectomy in 2011 due to uterine cancer caused by hyperplasia (thanks BPES).
Medically supervised Optifast through 2012, lost 40 pounds but put 20 back on as soon as it stopped.
In desperation, finally had gastric sleeve surgery (and hiatus hernia repair) in 2013.
The surgery worked great. Non-diabetic glucose readings 100% of the time since the day of surgery.  I reached my goal weight (healthy BMI) in 14 months, with a small surgery to remove my gall bladder in 2014.  (See the note at the end for details about my most persistent problem post-surgery.)
After I hit goal, I had a revision to gastric bypass due to ulcers and reflux, along with hiatus hernia re-repair (!), in June 2015. My weight remained stable, trending slowly downward.
Skin removal surgery October 2018, including abdominoplasty and breast reduction. 7 lbs skin removed, followed by about 10 more lbs healing-related weight loss during the first 6 months of recovery.
Now (April 2019) my weight remains stable between 120 and 125 lbs with no effort. I’m 4’11” so this is squarely mid-range for healthy BMI.
One note: I had terrible IBS-D from the day of my initial surgery. During flare ups I had attacks multiple times a day. It resisted treatment, the cause eluded all the tests the doctors tried, and it was just part of my life from 2013-2019. It was manageable and the other results of the surgery were still worth it. Then my doctor finally tried Rifaximin, a treatment for SIBO (not a normal side effect of bariatric surgery) and after a two week course and a month of gradually reduced symptoms, I’m now free of those symptoms too! It has only been a couple months but I am thrilled. 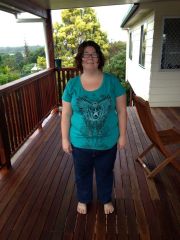