I first discussed lapband with my primary doctor in September of 2010. After countless attempts to lose weight and all unsuccessful I was at the end of my rope with frustration, depression and hopelessness.

My doctor thought it was a wonderful idea and said I fit the criteria for our insurance to approve me for it because my BMI was at the right level to need it..  I met with Dale Mortensen in early October and took the class required for the surgery.  I then did some lab work and we scheduled my surgery for January.  On October 19, I was called by Doctor Mortensens nurse who informed me that I had Hypothyroidism.  I immediately started taking medication to get that regulated. Was also relieved that it wasnt just something I had done wrong when I had all the attempts to lose the weight and could not.  On December 5th his nurse called me again and told me the devistating news that Insurance had denied my request for the surgery.   She also informed me that I had a right to appeal the companys decision to deny me.  I immediately called my doctors office and scheduled and appointment to see if there was anything else that we could do to try and appeal this. To show the company that this was something I needed very badly. I also sat tearfully and wrote a begging, pleading letter to the insurance company and mailed it that evening. Then I let the thought go out of my mind because I really thought it was hopeless. In early January I went in to see my doctor and we began combing through whatever we could find to get the insurance company to approve the surgery. We did lab draws we did anything he could think of and waited to get the results back. Then about 3 days after I saw my doctor I get a very unexpected phone call from Dr. Mortensens nurse saying that she was holding an approval letter in her hand.  I about fell out of my chair. I knew that my test results were not back in yet so it was nothing from what my doctor and I had been working on, so it had to have been the pleading appeal letter that I sent them.  Upon receiving a packet from the company it seems that my letter made them go through and check into my medical records and found that I was more than 100 lbs overweight so this is what got me the approval.  But the hurdles did not stop there.

My thyroid still was not under control. My doctor could not seem to find a dose that would suit me. My hormone levels were so off that I was having severe anxiety attacks. Something I have never really been prone to in my entire life. So he referred me to and Endocryinologist. Her finding were that my levels were at .112 and because of that I was at serious risk of heart complications during surgery, which at this point was 3 weeks away, scheduled for Feb 28 2011.  So she puts me on a dosage of .200mkg of levothioxine...way more than the .25 that my doctor had me on.  I had o postpone my surgery once again much to my dismay....But by early March my levels reached a hyperthyroid level instead of a hypothyroid and she brought my dose down. Here I was 2 weeks from my newly scheduled surgery and I got her go ahead to have it!  I was eccstatic!

My Mother flew in The 18th of March and I prepared to go in first thing Monday morning for surgery.  I had a great surgery. Very uneventful. I spent one night in the hospital and went home. Of course I was in some pain but nothing to horrible.  The worst part was having to take my pain meds crushed! That was horrible! My first week went well and I lost 10 pounds.  2 weeks later I was on the beaches of Florida with my husband enjoying a much needed vacation. When I returned from vacation I started a very intense exercise routine and since have lost almost 50 pounds! I am loving the new me. I went from a size 20 at the beginning of this year on January 1st to a size 14 and that is even getting a tad big on me. I am so proud of this accomplishment. I am a new person. I am happy and healthy and feel like I have so much more going for me.  I have confidence I have not seen in YEARS and everyone I know says they see a huge difference in me, not just in my size but in my overall personality.  I made a life altering decision, one that was going to ultimately change me forever. I would not take it back for a second because it has changed my life for the better, forever! 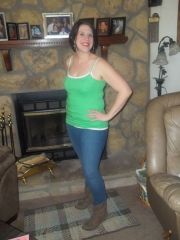