In early 2003 I stepped on the scale and it topped out at 393. It was at the time the most I have ever weighed in my life. It was also at a time where I was 'depressed' (really hate the word) a lot and at times didn't care much for life. I hated my job although I did it well and was well like by my boss. It was just a dead end job in my eyes. I was 36 years old and single with no love interest. I disliked myself so much there was no way I could expect anyone to love me.

I considered weight loss surgery many times and this was well before the Lap Band was really known about or popular. Only surgical weight loss surgery I knew about was hardcore surgery where they re-route your plumbing. This was not something I wanted. I heard to many horror stories surrounding this type surgery. My PCP had asked me if I had considered the surgery. He said he would back me all the way with documentation to get insurance approval.

I decided to take a different route...

Two friends I worked with approached me one day and dropped an Atkins low carb book on my desk and they convinced me to read it. I read it and didn't think it would work for me but I agreed to give it a try with them and we would form our own little support group.

It was not easy but from 5/2003 to 12/2004 I had dropped 174 pounds. I got on a plane for the first time in my life on 12/20 for a Disney World Christmas vacation with my family. I had never flown before but was told that the seating was very cramped....ya that was not a problem for this kid who weighed in at 219. I was not skinny given my height but damn I felt like I was on top of the world at the time.

So if your still reading this you must be saying 'OK what is so sad or pathetic about that story'. Well like the old saying goes when you lose weight on a diet and don't keep it in check you gain it all back and then some. Well for me that is very true and my then some turned out to be 87lbs.

If you did your math right you will figure out that I am now tipping the scale at 480lbs. In 6 years I managed to gain 261lbs. My 'depression' has not fully returned and that is mostly due to my very supportive and beautiful wife of 3 years. She deserves more, she deserves better. I often feel at times I cheated her by marrying her and then gaining all my weight back.

I have tried several times to get back on Atkins and get back the same motivation I had before but for some reason or another I just cannot seem to get it going or at least for any long period of time.

After attending a weight loss surgery seminar in September 2011 at the Center for Weight Management and Bariatric Surgery in Lowell, MA I decided this is the route to go. My surgery date is April 16, 2012....

My how the time flies. Surgery has come and gone and so has the pounds. I am writing this at 216lbs. To date I have lost over 270lbs. I feel at times on top of the world. I have my life and my freedom back. Most of all I am in the best health of my life. This little band inside of me is a true lifesaver. 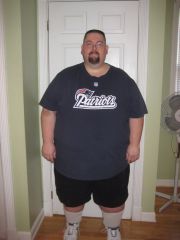 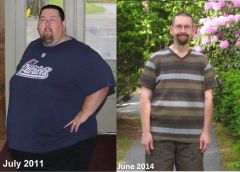