I've always been fat. Even as a kid. Starved myself as a high school freshman to try out for cheerleading. Didn't make the team. Gained it all back. Met my husband at 18, got married (in a size 18 dress) at 21. Starved myself again in order to join the Army (I was still overweight, but they measured me, plugged it into the puter and I came back ok). Made it thru basic training (by a hair) and moved to germany. Gained back everything I had lost. Became a proficient dieter - I know the caloric content of most foods. Exercised every single day. Never made it under 180 lbs. Injured my back and received a medical discharge. Had my first back surgery in 2000. Had 3 other ones between 2001-2006. Lost the love of my life after 19 yrs of marriage in 2007. Proceeded to lose 30 lbs immediately, then to gain 70 more over the next couple of years. Moved from VA to OR in 2009 to start over. A few months after moving I had my band surgery. At a whopping 248 lbs and a size 22.

The next 5 mths were rough. I didn't find anything different with the band. Ate just like I did previously. Didn't exercise. Thought I had failed yet another diet. Then came my 3rd fill. The magic started happening. I was satiated at a toddlers portion. Joined a gym and hired a personal trainer. Within the first year, I had lost 75 lbs. Started dating after 3 yrs of losing my husband. Met my "now husband" after I had lost about 80 lbs. Fell madly in love and got married this past Dec, after losing 104 lbs and getting down to 144.

Never got the hang of eating slowly - still ate like I was in Army basic training. If you didn't eat in 5 mins, you didn't eat. So. my excessive vomiting (which I did about 5-8 times a week), caused me to slip my band. After unfills/fills/tweaking my band over the last 6 mths, I've gained back 16 lbs. Which brings me to today, now 160 lbs and determined not to go 1 lb higher. I've prided myself on never counting or measuring anything - too much like dieting for me. I've eaten whatever I wanted, just much, much less of it.

I've determined that I like being smaller and nothing, not even my preconceived notion of "never dieting again" will cause me to gain my weight back. Even if that means I have to count, measure, or watch my carbs. I workout 3-4 times week. Today I'm starting fresh. There's nothing I can do about getting more fills, as just .5cc more and I get really bad reflux. I have decent (read: not great, but some) restriction still, doesn't seem to work at nite tho - where I can eat the side of a house. My slip is still tehre (a minor slip) but my dr said he treats symptoms, not xrays. If where I am is working without severe reflux, then he says I'm fine. Don't know whether I would rather empty it all out, fix my slip and start fresh with a new band or work with it the way it is forever. No clue what I should do.

That's my story in a nutshell

Well that was a few months ago. Changes have happened since then. My band totally herniated (brought me to the ER with extreme stomach pain) so they totally unfilled me. Told me I'd need a revision. But will Medicare pay for it since my BMI is only 28? Found out they will! Since it's a complication, they will cover any weightloss surgery but plication (still investigational). So, after much research and soul searching, I've decided to get a gastric sleeve. A huge % of banded patients who's band slipped will have slips in the future with a 2nd band. Plus, I'm pretty sick of the maintenance the band involves (the 6 hr round trip to the drs, the $160 each visit just to say HI) and looking for my "sweet spot". So, I have an appt with my surgeon on May 20th to talk about revision in late June. I'd like it to be sooner, but I'm going on an Alaskan cruise in a few days and going to Ca for 2 weeks in June, and I really don't want to be on a liquid diet during these. I'm a little scared of losing 85% of my stomach and of leaks, but complications exist with any surgery. So, I'm ready to be able to eat only a small portion of food again (since I've been unfilled, I can finish a Famous Star at Carls Jr, something I've been unable to do since being banded). I don't want to be able to finish a burger. I want to eat just 1 pc of pizza, just 1 taco, just 1/2 a burger. Thats what I got banded for. Not to diet forever. My family thinks I should just get my band out and do it myself. I don't want to have these feelings of emptiness in my belly anymore. I want to not have to think about food all the time. I wish I could have surgery on my brain instead of my stomach. 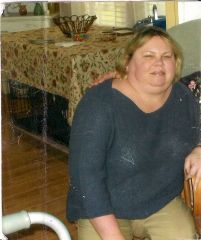 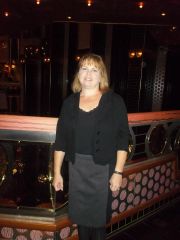