3,786 profile views
I'm probably not that different than most of the people who are having weight loss surgery. I have been "overweight" since elementary school, and I took a lot of really cruel teasing from some of the kids in my class. They had nicknames for me that stung, and my self-esteem plummeted. I started eating for comfort...eating was something that always made me happy. It was a big pastime in my family to have family dinners, lots of big feasts during the holidays and on special occasions, we all loved to eat. Everything seemed pretty food-centered. My Mom was an excellent baker and so cinnamon rolls and cookies were had with regularity...and I had a sweet tooth, and loved bread. I got attention at school for how much I could eat, and that little (seemingly) positive attention only seemed to encourage the behavior. I did get into sports for a couple of years in Junior High and lost some of it, but when my teammates were mean about my weight (particularly during shirts vs. skins) I decided I'd rather not participate, and avoid the teasing.

When I went off to college, the floodgates of eating opened. I had the freedom to eat whatever I wanted, and it was NEVER healthy. I discovered that first year that what I had intended to study was actually not something I had the ability or desire to do, and became very disillusioned...and then depressed. I stopped going to classes, my sleeping habits got really screwed up and again, as ever, food was my solace.

I've been on a roller coaster of dieting and regaining for decades, now...and after every cycle, my weight ended up higher. Every milestone, I would say to myself, "This far, no further..." And every time, I'd pass those milestones. I remember the first one was 200lbs. "No way I ever go past that." And then 250...300...350... When my weight started threatening 400lbs, I started looking into gastric bypass. It wasn't something I would have ever considered, and I initially had that feeling of failure just by going to my initial meeting, for the six months of classes required by my insurance carrier. I felt like I wasn't good enough, why couldn't I lose it naturally when others had? Of course, through my education I discovered that there is a lot of science and studies that now demonstrate how much the deck is stacked against obese people, biologically. When I got educated about it, suddenly I didn't feel so bad about it.

I went in for surgery on September 23rd, 2016 and expected to get the gastric bypass...however I ended up with the sleeve. Apparently, due to a prior surgery to repair an umbilical hernia using a mesh, my intestine actually grew into the mesh and made it impossible to safely do the Roux-en-y. So my surgeon converted me to the sleeve. I have read people having great success with it, so I'm not worried. It may end up having been for the best, because at my two week post-op follow-up, I crossed paths with a woman who had surgery the same morning I did, but had the bypass, and she wasn't doing half as well as I am in terms of overall energy and feeling good.

I am losing weight rapidly and feeling pretty decent, though I'm fighting many psychological battles due to the absence of my "constant companion" in food. It makes me feel a little naked and vulnerable, not being able to turn to food for positive feelings or an emotional boost. I know that was one of the major reasons I became obese though, and it's why I had the surgery. Now, I have to just learn to cope in new ways...my stomach will not allow me to live the lifestyle I once did. So while I'm struggling a little bit here and there mentally, I'm encouraged. 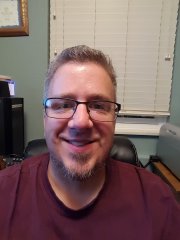