I am Super Morbidly Obese (aka Really Fat).  In addition to being fat, I live with infertility, panic disorder, depression, osteoarthritis, a herniated disc at L5/S1, neuropathy, edema, gout and a wicked sense of humor.  Actually, itâ€™s my friends and family members that have to live with that!

I have been fat my whole life, well almost my whole life.  I was a â€œnormalâ€ weight when I was born.  By the age of three my pediatrician told my Mother that if she didnâ€™t get my â€œeating in checkâ€, I would end up obese.  So apparently he was psychic as well!

The same year as the ominous prediction from my pediatrician my parents separated.  More weight piled on.  Then the divorce 2 years later and my fatherâ€™s remarriage 2 weeks after that.  I got fatter and fatter.  Baby brother then special needs sister born.  I was put on my first diet when I was 10.

Pre-teen turns to teen.  When I was 16 my Mother moved us almost 500 miles away.  Goodbye Daddy, siblings, friends and boyfriend.  For the first time my life my fat bothered me. But isolation and new everything left me, you guessed it, fatter and fatter.  I added 90 pounds in a year!

The teen turned into the young adult.  Job, apartment, friends, boyfriend, still fat but I own my curves.  Getting older, itâ€™s all still good.  Being fat is just who I am, I donâ€™t really fight it.  Sure I go on a new diet about every Monday but who doesnâ€™t?

Getting older, dating life kind of stalled for a bit.  Lost 60 pounds, put on 75.  Went back to Church.  Started leading Bible Study, joined the womenâ€™s group, feeling fulfilled.  Diagnosed with panic disorder, on and off various meds to find the right cocktail. Got fatter and fatter.

When I was 32 and weighing in at 405 pounds I felt God tell me he wanted me married and with a family.  I had been celibate by choice for a number of years and was content to live my life for Church and friends and family.  But God had other plans for me, as He often does.

June 2003 met my future husband on-line.  Three months later he moved to Ohio from Arizona.  Engaged to be married in April 2004.  Still hovering around 395-405.  Ten weeks before our wedding my Daddy died.  Suddenly.  My Daddy, my soul mate, my best friend.  I was devastated.

The months following were the darkest I can recall and I have had some really dark days.  Something in me broke, something was wrong, off.  I tried to figure out how to fix â€œitâ€ but nothing can fix â€œitâ€.  Not time, the love of my amazing husband or the knowledge that I will see him again someday.

Surprisingly I did not pack on any more weight.  We bought a house, got a dog and two cats.  Tried to have a babyâ€¦.for 9 years now.  So we live with infertility.  Is it from being fat?  Maybe.  We have not sought fertility assistance for as it is just way too expensive.

We did injections, they worked but not for very long.  Surgery was mentioned but not at 415 pounds.  Second opinion said the same thing, no, unless I lost 100+ pounds.  So I lost 50 pounds, 2 times, but that doesnâ€™t count!

In 2010 my knees began really hurting.  I was 425 pounds and 39.  Went to an orthopedic.  After x-rays I was told I would need knee replacement.  I burst into tears.  I was so young, fat, but young.  He told me I had osteoarthritis and would need this even if I weighed 125 pounds.

The problem is I donâ€™t weigh 125 pounds and they donâ€™t do knee replacement on people who weigh 425 pounds.  He told me I would need to lose 150 pounds, at least.  But with a bad back and knees moving is nearly impossible.  I can only do what I can.  Serious discussion on WLS ensued.

At the time neither my insurance nor my husbandâ€™s covered WLS and we cannot afford to pay out of pocket.  So I yo-yo dieted and did what I could.  Eat less but canâ€™t really move more.  Then my husband got a new job and they did cover it so we began the process March 2014.

Less than a month later he was laid off.  The same day he was laid off (5 hours earlier to be exact) I resigned from my job of 20 years to go on SSD as the pain of EVERYTHING had become too much to bear.  In August my husband got a new job, with insurance that covers WLS, so here I am.

I have begun the process again.  I am not sure what surgery I am having.  I am leaning towards the sleeve but will do whatever the doctor thinks is best.  I am on board for this, but I am scared and freaking out.  My identity is that of a fat woman, I have embraced it, I own it and now, I am rejecting it.

I know beyond the physical I am going to have a LONG mental road to get through all this, so support groups will be a must for me and I am hoping folks here will be an extension of that too.  So there it is, the cliff notes I assure you.  I will do my best to be my best without losing the best in me. 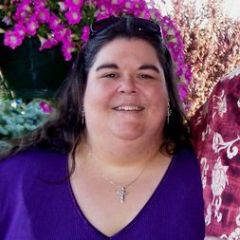