7,088 profile views
I have struggled with my weight and all of its burdens (figurative and literal) since I was a teen. Even before puberty, I found myself the target of some mean "friends" who called me fat and made me feel horrible about my body--though when I look back at childhood photos, I was ADORABLE and by no means heavy! Back then, though, I wasn't equipped to see through the hurtful words; I simply believed them. After all, if my friends were saying it, it must be true, because friends don't lie, right? Some things make more sense when you're 10.

When middle school came, I worried and obsessed over the fact that the popular girls were all less than 90 pounds (or so they claimed), and I was weighing in at 96 lbs, which of course convinced me that I was a cow. My well-meaning mother tried to reassure me by telling me I was "pleasingly plump", and an obese uncle told me I was "getting as big as a house". Eventually, I couldn't have seen a thin girl in the mirror if you had given me a million dollars to do so.

In high school, I was shy and geeky, with absolutely no concept of the fact that I was a size 6 with collarbones, sparkling blue eyes and a sweet smile. All that mattered was that my friends were size 4, 3, or 0, which made me The Fat Friend. I became an emotional-trigger eater. I ate to insulate myself from being hurt, and hell, if I was already The Fat Friend, what did it matter if I ate an extra serving of dessert or binged on cookies between meals? I became a self-fulfilling prophecy.

In college, I dreaded gaining the "freshman 15", so I gained the freshman 20. Overachiever me, making the most of the meal program I had paid good money for, by golly! Classes and studying and holding down a part time job to pay my tuition left me with little energy and less free time. The last thing you'd catch me doing was exercising, unless it was to walk the half mile back and forth across campus to classes. That's probably all that saved me from gaining the freshman 45 instead.

Fast-forward a few years, and I was firmly on the dieting merry-go-round. Weight Watchers, three times. Jenny Craig, once. That program actually saw me lose the most weight I ever had--over 25 lbs.--and I was thrilled to be weighing in at 152 pounds after six months of hard work and deprivation.

All that work was undone by a family member, a marathoner with few people skills, who had recently married into our clan. He eyed me up and down and asked how much I weighed now. Since I was fairly proud of my accomplishments, I overlooked his rude question and gave him an honest answer. He eyed me again, sniffed and said, "Hmmph. Still too much." I was so humiliated, I ate my way through the next few months and never went back to Jenny Craig.

I attempted Weight Watchers halfheartedly two more times in my 30s. Once, I let myself get discouraged by the fact that my husband (who joined along with me) was shedding pounds with so little effort and so much cheating. There went all my motivation. The second time, I let myself give up after doing what I felt was an AMAZING amount of exercise during a particular week. I had taken myself out of bed an hour early every day to do a workout video (wearing hiking boots rather than sneakers so as to maximize my efforts--heavier shoes, hey, I'd try anything). I had followed my dietary restrictions above and beyond the call of a chubby girl's duty, drank my water, taken vitamins, done it all so well I fully expected at least a two pound loss at weigh-in. The day came, and I GAINED half a pound. My co-members assurances that it was either muscle or water weight fell on deaf ears. I gave up and never went back.

And here I am, post-op, nearly 8 months out!
I am now on The Loser's Bench and LOVING it more than I can express in mere words.
My surgery went smoothly; I recovered well--I went in on a Monday and went home on a Wednesday with only minimum pain or discomfort. Nothing compared to a C-section or two!
I struggled to sip water at first (I think we ALL do) and going back to solid foods was a bit scary, but I made it!
At the 8 month mark, I'm down over 80 lbs. from my heaviest weight. I can now wear size 10 pants and size medium tops--smaller than I've been since high school! Even my shoe size has shrunk; no more "extra wide" shoes or wide-calf boots for this girl.
I have more energy and feel less depressed than I have in years. It's amazing what having a single chin will do for your self-esteem!
My sleeve has helped me to totally redefine my relationship to food. I eat less emotionally; I make healthier choices, and I feel like I have been given a second chance at life--and I fully intend to use it! 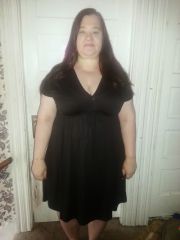 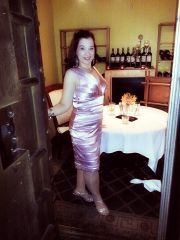