5,563 profile views
<p>My surgical weight loss journey began in 2013.  I had lapband surgery June 26th, 2013.  I had the realize band and I loved it!  10 months into my journey I was down 83 pounds from my highest weight of 355.  Then SURPRISE I was pregnant.  Having tried in the past unsuccessfully to get pregnant this was a very welcomed surprise!  I had half the fluid taken out of my band at the beginning of the pregnancy to assist with nausea and to have as healthy a pregnancy as I could.  I got back up to 324 during my pregnancy.  I delivered a healthy baby boy in late 2014 and began refilling my band in February 2015.  My surgical team went up slowly with the fills however my golden number from before surgery was not my golden number after and I was too tight.  Over the next several months we would put fluid in, take it out, put it inâ€¦you get the idea.  I did get back down to my pre-pregnancy weight loss even seeing 269 on the scale at one point.  Ultimately in September 2015 I had an upper GI which showed the band had slipped.  All the fluid was removed.  All seemed to be well until December when out of nowhere I couldnâ€™t keep food down again.  I had another upper GI and the slip was still there and now the band had also begun to move as I moved.  The band was removed in December 2015. This leads me to now.  In February 2016 I decided to pursue weight loss surgery again.  I am pursuing Gastric Sleeve.I have chosen a different surgical program than the one I was with originally.  This one is closer to home and wasnâ€™t an available option in 2013.  I have completed my surgical consult, psych evaluation and 3 month medically monitored weight loss program.  This was all part of my insurance requirements.  I currently weigh 307 pounds.  I promised myself I would not see 300 again on the scale and there it is.  My file was sent to insurance on June 17th and I received approval on June 22nd. I am scheduled for surgery on August 16th. My anxiety is high this time as I worry about my little boy. I have a wonderful support system but they are not me. I worry about him not having his mommy up and running for a few weeks. Ultimately I am doing this so I can live a long healthy life with him. 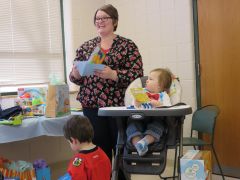