I guess it would be back in around 1994, I was 13/14 and the whole body image thing was starting, I didn't look like everyone else, I was taller, bigger, louder, I had friends but not many, people judged me by my size even then. I did what i could to fit in but i wasn't great at sports or English or reading, maths was ok but thats not really a great selling point.. By 15 i was deeply unhappy, I had got a boyfriend but he was vile, It started off so good, we would play around and laugh together, go on walks in the fields and he would have packed us a pic nic, Then in the spring of 1996 something happened,My grandfather died and I started drinking a lot, He got new friends who i didn't like him hanging around with, I was by now 16 and my Boyfriend 15. He had got inside my head, filled me with the sense that i was useless, fat, a waste of time. I didn't deserve to even breathe the same air has him, If i didn't do as i was told, i would pay the consequences. By June 1996 my weight had gone up so much, i was weighing almost 20st by then, I ate whatever, drank far to much alcohol and i didn't care, No one wanted me anyway and if they did it was only to be a punch bag.... I finally got the courage to leave him on the 24th June 1996.

By the time i turned 18 i had met someone else, He was a very straight and soft man, From a good family and well raised. went to a boarding school and well educated, I opened up to him and told him of my past relationship and how i found it hard to trust since, He assured me I was safe with him, he was a good man, He was 7 years older than me, I hid my drinking from him for a start, just thought i liked a couple at the weekends, little did he know the full extent of it by then.

In 1999 i had my first miscarried, Completely devastating, I once again turned to the bottle, In 2002 we married but 4 months later i miscarried again, The words the Ex had used came back, i was useless, a waste of time, I hated myself for not being able to carry my husbands child, The main job a woman has is to carry a child and i couldn't even do the right...

Then things began to change, i stopped drinking, sorted my head out and tried too move on, Babies would come one day, right?

It started with me not doing his laundry right, not cooking his dinner on time, not cleaning the house well enough. bit by bit he changed, who was this man? Why had he suddenly changed, then the arguments turned physical, he would slap me if his food wasn't ready the moment he got home from work or throw it at me or the wall if it wasn't what he wanted, he would stand over me watching me clear it up.

This continued and slowly but surely got worse, My weight went up and with every pound came another remark about what a fat useless nothing i was and i should be grateful he even bothered with me because no one else ever would. My weigh went up and up until i realized i was over 30 stones. I went to see my GP for an appointment and i mentioned how i was unhappy with my size and needed help, i had tried diets but nothing ever lasted, Depression made me eat, I didn't drink any more but food had taken its place. He gave me some pills to stop me feeling hungry but it made no difference, I didn't eat because i was hungry, I ate because i was hurting, because i was depressed, Because i was a useless waste of space.

I went back to him some time later and he said i had 1 further option,

I went home and told my husband, He said "see, you can't even lose weight like a normal person, what the hell is wrong with you"
My GP wrote off and asked if i could get funding and a letter arrived and i didn't meet their criteria, I was so upset but that was nothing new, 18 months later at another GP appointment i just sobbed and sobbed, I told him if i didn't do something soon i was going to die, either naturally or i would help it along. I couldn't take it anymore, My back always hurt, my knees were sore, i would get sores under my skin folds, Personal hygiene had gone out the window and i simply didn't care anymore... He applied again and in November 2010 i got a YES!

I went for my first appointment at Luton & Dustable Hospital (L&D) and there i saw a dietitian, She weighed me and i was 32st 8lb, I had never felt so ashamed and disgusted in myself.... I came out of there hoping for some understanding from my husband but all he can say is "its your own fault we're here"

Every appointment there after i attended alone, All tests, scans etc etc... I was alone.

At L&D I had made some new friends, 2 ladies called Louise and Denise and a guy named Shaun, We would chat in the waiting room, nerves were setting in, Wondering what could be, How would our lives change? We had to go on strick diets before the surgery and again after. We talked about how hard they were and how much we missed our food. It was great to finally meet some people similar to me.

When i woke up i felt like i had been hit by a truck, by the Thursday i was feeling a lot better although very sore, i had been to the loo a few times and noticed a familiar face in the next bay. Shaun! It took me a few attempts but in the end i braved it and i called him out. we talked for a few moments about how we were doing, he had had his Operation on the Tuesday, i asked for his number and i left it at that. Later that day Shaun left to go home. Him leaving filled me with a sadness i wasn't expecting. On the Friday i went home to the husband and my mum had also come to stay to help care for me for a few days. Home was not nice, He didn't want to help me, he slept in the spare room, i did my medication myself, he was just vile, after 3 days my mother couldn't bear him any longer and she left to travel to 200 miles home.

[u][size=5]Shaun[/size][/u]
[size=4]We had talked a few times on the phone, supporting each other, helping each other along, i had told him my [/size]marriage[size=4] was over but i just had to find the courage to tell my husband. he said i was strong and i could do it if its what i really wanted, i said, it isn't just a want, I need to and have to if i want any kind of future.

On the 13th Aug i told him, I want a Divorce. He looked up from his laptop and said Ok. That was it, he said i will move out as soon as i can......4 days later Shaun called me, He said i have something on my mind, I said, what? He replied quietly, You! .....I didn't understand, He said, I think i love you, I couldn't [/size]believe[size=4] this, I felt the same but i daren't even believe he felt the same. I said, i am in a weird place right now but i feel the same, just be patient with me... 13 weeks later i packed my bags and left everything i knew for that man in the waiting room. The first kiss we shared was like nothing i had felt before, Could i dare to fall again... To late, I loved him, Shaun was my savour. He has struggled like me, been judged like me and fought with his weigh all his life, He was 45 stone at his most and has also lost 20 st an still doing well. He encourages me, supports me, treats me right and loves me like a man should, he tells me every day how wonderful i am and he is too, I have tried to be the best i can, and sometimes i get scared i will get it wrong but for the first time in my life i have a man that doesn't use his fists on a woman to get his point across....[/size]

So that's my story so far, Our wedding will be next year, 2nd Aug we hope, 3 years from Shaun's Operation. I am now under 15 st, less than i was when i left school which is amazing, I am happier than i ever though i could be. 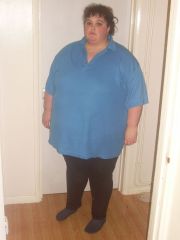 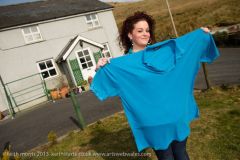