2,459 profile views
**Weight lost includes my pre-op diet as well as 13lbs lost prior to starting this journey**

February 13, 2015 - True Results Insurance Coordinator called me to let me know she was submitting my paperwork to insurance for approval.

February 20, 2015 - I called insurance to see what the status was of my surgery auth. They let me know it had been approved on the 18th!

February 26, 2015 - Finally was able to get a hold of the insurance coordinator and patient advocate to let them know that I had been approved (bad weather in the area past 2 days)

March 2, 2015 - PreOp clearance doctor's appointment with PCP for blood pressure. Doctor said he believes that I am low risk for surgery and sent clearance.

March 6, 2015 - Received a call from the surgeon's office and I have an appointment for 9am on March 9th  to meet with the surgeon and hopefully schedule my surgery! 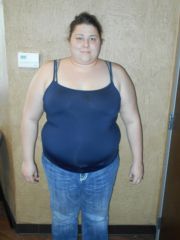