I've been overweight since preschool and grew up being easily described as "the big one" in almost any setting. After high school my body changed enough that I was more big than fat but after getting married I stopped almost all of the physical activities which had kept me more beefy than flabby. Now I'm older I've developed type 2 diabetes and high blood pressure and after losing as much weight as I could through better eating I'm still morbidly obese according to the BMI and even though my blood sugar is well managed my blood pressure keeps going up every year. On paper I guess I was a perfect candidate for lap band since it took less than a week for the insurance company to approve me after submitting reports from the Psychologist, Nutritionist, and my Internalist.

I'm ready for this change but I'll admit I have some fear about how much of my identity is tied up in being "The Big Guy" and am terrified of the idea of becoming one of the cruel people who tormented me growing up. 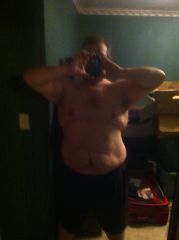