Hello fellow sleevers! Its my 3rd day out of surgery ( Aug 22 sleever) and I am feeling better. Some background info on me because I am not sure where to even start!

I am 30 years old from NJ/NYC. Around Feb I weighed a staggering 517lbs. I was walking around disney world in FL thinking, hey, where are all the people my size? I'd like to think Im the type of person who doesnt even know hes fat, until its too late. ( what do u mean this bar on the haunted mansion ride doesnt go down???). Around that time when I came home from FL I realized that while on my vacation I slept noticably better. I blamed me no longer drinking coffee and sugar as the reason I felt so great on vacation, and quickly lost 10lbs from this alone when I came home. One day while staying late at work ( an accident , as I am a bus driver ) a co worker walked by me. I couldn't recognize him at all! He explained to me all the details of his sleeve, and a few other of my co workers had gone with him. Not wanting to be rude, I said I would atleast check out the info. A few weeks pass, and I promise to atleast check out the seminar my dr was having. It was kind of funny looking back because it was at a local gym, the last place i wanted to be seen, let alone walking up to the info counter and asking hey "wheres the meeting for fat people ?" ( sorry to offend just at my weight i throw the term around). I remember thinking to myself, I hope i just have to ask where, and i get pointed to a room. As luck would have it, the lady was so busy she couldn't hear me and I had to ask 3 times. She wasnt really sure and had to call around to find out where it was, getting atleast 3 other people involved, at which point I wanted to run and hide in my car! Fast foward a bit, I found the place, met the surgeon and told him i would make an appointment if i thought I was serious. A week later I made the apointment which is kind of strange, I guess i went in thinking I was going to be bamboozled or tricked into, and left thinking man I WANT THIS!

My surgeon, Dr. R Sadek of Somerset NJ was fantastic. He told me I had to lose atleast 30lbs before the surgery to slim down the stomach area. At first I thought this was impossible. But I quickly lost 10lbs again. I purchased a treadmill and began chugging away 30-40 minutes a day, eating better and BOOM 30lbs! The worst part of the surgery for me , was the dreaded pre op diet. OMG. The crazy part is as you progress from full liquids, to clear only, you wish you were able to have some of the stuff you had on full liquid! About halfway into the 2 week liquid, I met my co worker again who confessed to me he had mcdonalds two days before his surgery. This was awful I thought! How could he? And it got to me. I wish I could sit here and say no I didnt cheat on my 2 week pre op. But I did. Honest here ? You bet. I had two slices of pizza. I didn't feel bad either about it too, but I knew I had to get back on track, and finished the last 6 days strong. My insurance, blue cross blue shield sent in the letter of approval literally days before the surgery but picked it up 100%. Infact the only thing they wouldn't pay for is for me to see a nutritionist. But they will be for my surgery? Go figure!

My surgery on Aug 22 was at Robert Wood Johnson in NJ. I have to admit everyone was so nice and friendly at the hospital. I guess its me being from NY always thinking people will rush or be angry with me? They couldn't find my vien in my arm using a sonagram, so they had to put a "central IV" in my neck. This was painful and had I known this I would have said NO! It was very messy without TMI or grossing anyone out but an IV in your neck is not very pleasant.

After waking up from my surgery, I felt terrible. I had to wait a bit to get pain killers because I was feeling nauseous and apparently you have to wait a bit if you feel this way. After I had my morphine I spent the rest of the day snoozing, off and on. ( and realizing I had a cathoder which kind of liked, kind of hated?). I was not allowed to drink anything till the Xray the next day. The next morning I had my x ray , no leaks, and was given an amazing amount of clear foods I could never eat . Bowl of chicke broth, jello, ice tea, waterbottle, italian icee. I think I had about two sips of the tea and felt full. I could not believe it!

So, around 1pm, roughly 24 hours later I was given the OK to go home. I was pretty good, I mean I walked to the car myself and felt like someone punched me in the stomach, but I thought it would have been much worse. Pain killers for the win?

Yesterday ( first full day out of the hospital) I spent mostly sleeping on the couch watching cartoons and semi talking to people who called to check on me, until they realised I really couldnt pay attention. Day 3, I feel great. Im amazed how long it takes me to drink a cup of water. I have no hunger at all, which I always thought was just plain BS when people say on this on boards, but I have no desire to eat at all. I don't mean this in a bad way of course, but looking around I can't wait to try some of the recipes you guys have posted, IE a pumpkin latte or bean cup cake recipe I saw posted! 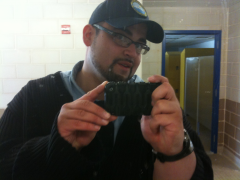