16,026 profile views
I had the gastric sleeve surgery on 03/05/12. On my pre-admissions form for the VSG, there was a question about anesthesia - whenever I had my son in 2004 I had to have more than the norm as my body didn't 'go to sleep' equally on the left and the right. Based on this response, the anesthesiologists gave me more than usual for the VSG. After the VSG surgery I was passed out, very lethargic, slept alot. I would try to do my IS (breathing exercises) and couldn't barely do them. Then I'd pass out to sleep again. I had a slight temp in the hospital so they kept me an extra day. I was d/c'd 3/7/12.

On 3/9/12, I went back to the hospital. I was spiking a temp and my pulse was rising. Slowly, I couldn't do my I.S. (breathing exercises) as well as I had been doing them. I went back to the ER and they admitted me for aspiration pneumonia. I stayed in the hospital 6 days, on I.V. antibiotics. I was d/c'd 3/14/12, taking levaquin by mouth. I followed my diet, did my breathing exercises, moved as much as I could .... but my temp would spike now and again. I went to the ER that weekend twice, as my temp at home would be 101-102, but once I got to the ER it went to 99 or normal. The ER said that getting out in the 'nite air' sometimes does that (no idea why but ok). Then that Sunday, 3/19/12, about 330 in the morning, I could no longer sleep in the bed. I felt short of breath (very shallow breathing, couldn't inhale deeply) and I had a pain in my left shoulder and mid back. I tried to wait until the dr's office opened at 9 that Monday morning, however by 845 I couldn't take it anymore, the pain was excruciating. They told me to go back to the ER. I did and they did xrays and cat scans, I had a leak in my stomach and an abscess in my diaphragm.

So hospital readmission 3/19 to 3/29. They wanted to rush me to revision surgery that night. I went into a slight shock I think, teeth chattering, scared, wishing I had never done this..... but the electricity kept kicking in and out all day at the hospital (first someone hit a pole and caused the electricity issues that day, but that night severe storms developed and the lights flickered quite a few times). My dr. said let's not take any further chances, we'll do your revision first thing in the morning. I had revision surgery 3/20, early. The dr. found the leak and saw where part of my stomach line was necroting so he cleaned that all out, restitched and reglued the line and cleaned out as much as he could. Then they did XRays to see how it looked, more barium swallows and then a cat scan .... they wanted to see the abscess and if I had any other leaks, which I do, now in a different part of my tummy. The radiologist placed what is called a piggyback drain (it looks like a long bag with an "accordian" at the top) into my left flank (right under your bra line/where the diaphragm is located). I have a JP drain in my stomach (it's right above my spleen per the dr.) .

I got worried about the cost of my stay and spoke with my dr. on this as he was thinking that I could go home on home TPN (total proper nutrition - it's a bag of nutrition that they mix up especially for each patient, based on the blood draw, which tells them what you are missing in your system. It's high in amino acids, which encourages quicker healing of leaks). I didn't have this coverage in my stinky insurance plan (I work as a contractor, which means great pay/lousy insurance.... well according to the option I chose). Dr. did an endoscopy on 3/27 to see where any leaks were and how big .... there's still one about the size of a pencil eraser. Social work/case mgmt became involved, trying then to put me in a nursing home (hello, i'm 38 years young) or on home iv antibiotics/tpn. That's where things got really bad - social work consulted me mid walking activity and told me of the nursing home option. Next time I saw them as I was doing laps in the hall, she told me maybe my dr. could do a feeding tube and send me home. Either way, I thought that was inappropriate and it brought me to tears.

My dr. came in and said we can do a dobhoff tube (in your nose) and you can do protein shakes at home through that OR we can not put a tube in and see how you progress. I have been IV'd so much (each time they gave me vancomyocin, I would swell up and hurt at the IV site and they'd have to move it), they put in a PICC line (iv that goes into your arterial vein/a more 'direct' route). Tired of being a pin cushion and hooked up to so much, I opted for the no tube. But I am worried. The dr. said this will deplete some of your muscle mass, but I was very active in the gym before and used to weight lift so I have more muscle mass than most. But I am worried on healing, worried on paying the dr's bills and trying to figure how I'm going to pay the lessor rate that the hospital has generously given to me (payment plan probably for 36 months).

As of 08/17/12, I've lost 89.5 lbs and I'm the smallest size I've ever been in my life. I have to admit, other folks my weight/height are smaller usually in size than I am currently. In honesty, it is frustrating. But then again, I am still happy with MY journey. I am still learning how not to compare to others and work on my other head issues. The weight loss is easy. The head work ... not so much. I am a 'work out fiend" but please do not discount my experiences because "how would you know, you work out so much." That's the same sort of negative energy overweight folks get and I don't appreciate it now as much as I didn't appreciate it then. We all have our struggles, some with other items not as common as working out, but all issues are still valid. Best always. 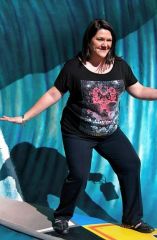 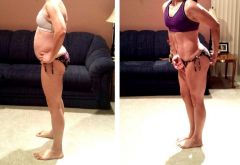