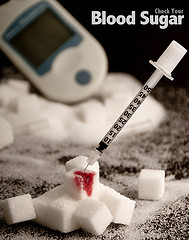 The number of people in the UK living with diabetes has reached an all-time high.

According to the UK Department for Health (DH) there are currently 3.2 million Britons diagnosed with the disease, with more than 90 per cent of suffers having the obesity-related Type 2 variant. However, the figures look even worse when one takes into account the more than 630,000 people in the UK estimated to be living with the condition unawares.

The UK - like many nations - is failing to tackle ‘epidemic’ rates of obesity. And with this in mind, the Department of Health predicts that the percentage of people living with diabetes will jump from the current rate of 7.3 per cent to 8.8 per cent by 2030; a rise that would put the UK on par with the US, where 8.3% of the population currently lives diabetes.

As part of their strategy to address this significant problem, the British Government is urging people aged between 40 and 74 to have an NHS Health Check.

Early detection of diabetes is important, as it allows those living with the disease to better manage their condition, and in this regard, the program has been a huge success with more than 1.3 million patients having taken the health check so far. However, we all know that prevention is better than cure, and if the UK wants to properly address this epidemic, efforts must be made to stop people from developing the disease in the first place.

Professor Kevin Fenton, director of health and well-being at Public Health England (an executive agency of the DH), said: 'With Type 2 diabetes becoming more common, the NHS Health Check presents an opportunity for individuals to take steps earlier, such as weight control, to prevent or even reverse diabetes in its early stages.

'It is important that those who are eligible take up the offer of an NHS Health Check so their risk of serious, but potentially avoidable conditions, can be assessed, and lead to early intervention.

'PHE is committed to increasing physical activity and reducing physical inactivity across England, and these aims are prominent in a number of public health campaigns.'

· According to Diabetes UK there are currently 630,000 people living with undiagnosed Type 2 diabetes.

· Number of people living with diabetes in Britain has reached an all-time high.

· Currently 3.2million people in the UK have been diagnosed with diabetes.

Nick has worked as a clinical dietitian for more than 15 years, both in the public health system and privately. Until 2009, Nick worked at Flinders Medical Centre in South Australia as a specialist gastrointestinal dietitian and in the intensive care unit, as well as in his private practice. Nick now works full time in private practice, where he continues to see people for gastrointestinal conditions, but also bariatric surgery clients.

Honestly they need to be telling people under 40 who are overweight/obese to be getting a health check up.

Diabetes runs in my family. And so does obesity. I was diagnosed with type II Diabetes at the age of 32. I'm guessing that looking back, I had it for at least a good year before it was diagnosed. For me, I went that long because I was temping and did not have health insurance (I know that is not a thing in the UK).